1 And it came to pass, when he had made an end of speaking to Saul, the soul of Jonathan was knit with the soul of David, and Jonathan loved him as his own soul.
2 And Saul took him that day, and would not let him return to his father's house.
3 And David and Jonathan made a covenant, for be loved him as his own soul.
4 And Jonathan stripped himself of the coat with which he was clothed, and gave it to David, and the rest of his garments, even to his sword, and to his bow, and to his girdle.
5 And David went out to whatsoever business Saul sent him, and he behaved himself prudently: and Saul set him over the soldiers, and he was acceptable in the eyes of all the people, and especially in the eyes of Saul's servants.
6 Now when David returned, after be slew the Philistine, the women came out of all the cities of Israel, singing and dancing, to meet king Saul, with timbrels of joy, and cornets.
7 And the women sung as they played, and they said: I Saul slew his thousands, and David his ten thousands.
8 And Saul was exceeding angry, and this word was displeasing in his eyes, and he said: They have given David ten thousands, and to me they have given but a thousand; what can he have more but the kingdom?
9 And Saul did not look on David with a good eye from that day and forward.
10 And the day after the evil spirit from God came upon Saul, and he prophesied in the midst of his house. And David played with his hand as at other times. And Saul held a spear in his hand,
11 And threw it, thinking to nail David to the wall: and David stept aside out of his presence twice.
12 And Saul feared David, because the Lord was with him, and was departed from himself.
13 Therefore Saul removed him from him, and made him a captain over a thousand men, and he went out and came in before the people.
14 And David behaved wisely in all his ways, and the Lord was with him.
15 And Saul saw that he was exceeding prudent, and began to beware of him.
16 But all Israel and Juda loved David, for he came in and went out before them.
17 And Saul said to David: Behold my elder daughter Merob, her will I give thee to wife: only be a valiant man, and fight the battles of the Lord. Now Saul said within himself: Let not my hand be upon him, but let the hands of the Philistines be upon him.
18 And David said to Saul: Who am I, or what is my life, or my father's family in Israel, that I should be son in law of the king?
19 And it came to pass at the time when Merob the daughter of Saul should have been given to David, that she was given to Hadriel the Molathite to wife.
20 But Michol the other daughter of Saul loved David. And it was told Saul, and it pleased him.
21 And Saul said: I will give her to him, that she may be a stumblingblock to him, and that the band of the Philistines may be upon him. And Saul said to David: In two things thou shalt be my son in law this day.
22 And Saul commanded his servants to speak to David privately, saying: Behold thou pleasest the king, and all his servants love thee. Now therefore be the king's son in law.
23 And the servants of Saul spoke all these words in the ears of David. And David said: Doth it seem to you a small matter to be the king's son in law? But I am a poor man, and of small ability.
24 And the servants of Saul told him, saying: Such words as these hath David spoken.
25 And Saul said: Speak thus to David: The king desireth not any dowry, but only a hundred foreskins of the Philistines, to be avenged of the king's enemies. Now Saul thought to deliver David into the hands of the Philistines.
26 And when his servants had told David the words that Saul had said, the word was pleasing in the eyes of David to be the king's son in law.
27 And after a few days David rose up, and went with the men that were under him, and he slew of the Philistines two hundred men, and brought their foreskins and numbered them out to the king, that he might be his son in law. Saul therefore gave him Michol his daughter to wife.
28 And Saul saw, and understood that the Lord was with David. And Michol the daughter of Saul loved him.
29 And Saul began to fear David more: and Saul became David's enemy continually.
30 And the princes of the Philistines went forth: and from the beginning of their going forth, David behaved himself more wisely than all the servants of Saul, and his name became very famous.

Previous Chapter   1 Samuel   Next Chapter
Posted by Bible Illustrated at 12:34:00 PM No comments: 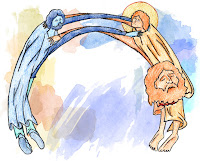 
1 Dare any of you, having a matter against another, go to be judged before the unjust, and not before the saints?
2 Know you not that the saints shall judge this world? And if the world shall be judged by you, are you unworthy to judge the smallest matters?
3 Know you not that we shall judge angels? how much more things of this world?
4 If therefore you have judgments of things pertaining to this world, set them to judge, who are the most despised in the church.
5 I speak to your shame. Is it so that there is not among you any one wise man, that is able to judge between his brethren?
6 But brother goeth to law with brother, and that before unbelievers.
7 Already indeed there is plainly a fault among you, that you have lawsuits one with another. Why do you not rather take wrong? Why do you not rather suffer yourselves to be defrauded?
8 But you do wrong and defraud, and that to your brethren.
9 Know you not that the unjust shall not possess the kingdom of God? Do not err: neither fornicators, nor idolaters, nor adulterers,
10 Nor the effeminate, nor liers with mankind, nor thieves, nor covetous, nor drunkards, nor railers, nor extortioners, shall possess the kingdom of God.
11 And such some of you were; but you are washed, but you are sanctified, but you are justified in the name of our Lord Jesus Christ, and the Spirit of our God.
12 All things are lawful to me, but all things are not expedient. All things are lawful to me, but I will not be brought under the power of any.
13 Meat for the belly, and the belly for the meats; but God shall destroy both it and them: but the body is not for fornication, but for the Lord, and the Lord for the body.
14 Now God hath both raised up the Lord, and will raise us up also by his power.
15 Know you not that your bodies are the members of Christ? Shall I then take the members of Christ, and make them the members of an harlot? God forbid.
16 Or know you not, that he who is joined to a harlot, is made one body? For they shall be, saith he, two in one flesh.
17 But he who is joined to the Lord, is one spirit.
18 Fly fornication. Every sin that a man doth, is without the body; but he that committeth fornication, sinneth against his own body.
19 Or know you not, that your members are the temple of the Holy Ghost, who is in you, whom you have from God; and you are not your own?
20 For you are bought with a great price. Glorify and bear God in your body.

Previous Chapter   First Epistle to Corinthians   Next Chapter
Posted by Bible Illustrated at 5:20:00 AM No comments: